Well, the Thanksgiving break is over and it was back to school bright and early in the fog these past few mornings...winter is coming! So I'm dying to know, how was everyone's Black Friday experience?? Mine was awesome! My best friend Elise and I left the house around 11pm Thursday night and I pulled into my driveway the next day around 4:30pm. 17 1/2 hours of fun-filled shopping, eating and laughing our heads off. We were just slightly sleep-deprived. We started out at 12 midnight at Toys-R-Us where there was just a short line to get in. Once in, we gathered what we wanted (things were slightly picked over since they opened at 9pm) and walked right up to the registers to check out. When we walked next door to get in the line to get into Target we about died when we saw how long it was....STILL at 12:45am! So we packed it up and headed to the next closest Target where it was much less busy. We spent about an hour there and stood in a line that was only about 10 minutes long to check out.

From there we headed over to Marin County where we planned on stopping in at a Starbucks for hot chocolate only to find it wasn't open (even though it said it was suppose to be when I checked online). This quickly became the theme for the night...places saying they would be open but they really weren't. We parked in a parking lot around 2:30am and decided to check out Anthro's online sale that was suppose to start at 3am EST. Lucky for us it actually ended up starting 30 minutes early! There we were, in an empty parking lot at 2:30am online shopping to get our 50% off sale items at Anthro. Crazy? Yes! Worth it? YES! We were both able to grab several things we were hoping for. I heard tons of people ended up getting cancelled orders from those middle of the night orders but luckily all of my items shipped, and all but one of my friend's shipped too.

After our little online adventures were done we headed to the mall we would spend the majority of the day at. We found an open Peet's Coffee store and grabbed some hot chocolate around 3:45am. The only store in the mall that was open at this point was Macy's so that's where we went. Delirium was starting to set in at this point and we had the best time just walking around picking "favorite Christmas presents" out for ourselves and just being silly. We took lots of pictures! Around 5am we set out to see if any other stores were open, since several had said they would be....Um, NO! Nothing. Well, Abercrombie was, but you know, not my first choice. We headed down to Anthro to see if there was a line yet for the 50% off sale items promo but found there were only a few others.

Finally when 6am arrived there was a bit of a crowd but still not bad. As the door opened my friend and I were the first ones in and got our tickets. Our plan was to head straight to the sale shoes and see what was there. I found one pair and Elise found 2. We browsed through the sales racks for about 30 minutes, grabbing what we saw and then headed to the dressing room. There were several racks outside the sale room as well as a packed sale room to look through. The selection was actually pretty good. I only waited about 5 minutes to get a dressing room. I noticed there was coffee or tea and muffins set out in the dressing room waiting area which I thought was a nice touch. The SA's were all super friendly and helpful and handled the growing crowds well. About an hour and a half later we got in line with our purchases...only waiting about 5 minutes to pay, and were on our merry way. We THOUGHT we were finished with Anthro...more on that later.

Here's a few of my favorite sale purchases I scored at 50% off either in-store or online...it's just hard to pass up when you're getting 75% off the retail price!!!

I'm fairly certain those AG Stevies being marked down 1/2 off the full price point online was a mistake, but I happily took advantage! They are back to full price now.

From there we hit up Gap, Banana Republic, Gap Kids, Janie and Jack (where I found some of my boys' Christmas clothes), William Sonoma, J Crew, Loft, Francesca's, Aveada and then decided to go back into Anthro one more time to try on some full price shoes. AT this point it was past the 11am mark when the 50% off had ended so we thought it would be a better time to go in and browse all the full-priced items. As we walked past the sale racks once more we ended up finding a few more items that were not out earlier in the morning! We were so baffled! We each found a few more items to purchase, and luckily were able to still get them at 50% of because a nice SA hooked us up with another ticket once we told him we had already been there once earlier. Lesson learned...always go back to see what else may be brought out!

After we finished up round 2 we did a walk-though at the shoe section at Nordstrom but neither one of us had the energy at that point to really care about trying anything on. Rare. We were super hungry and just needed a reboot of energy--STAT! So we decided we were done there and headed to lunch at PF Changs. YUM! It tasted so good! After lunch we headed next door where there was a Barnes and Noble. Elise had read online that they were having a sale that was "Buy any one educational toy for 50% off". She had wondered if this included legos so we checked it out. Oh yes, legos are considered educational folks! If you have kids that love legos than you know how expensive they can be and that they rarely go on sale for a very deep discount. When we realized we could score the BIG sets (like the $150 sets) for half off, we got a little crazy and obsessed. My friend was able to get one large set at that Barnes and Noble and then we decided we'd do a "U-Turn" and hit up every Barnes and Noble we had past that day to try to get a few more. To help us stay awake we stopped by See's Candy to get our chocolate fix before heading out...always a good thing.

After stopping by two more Barnes and Noble and striking out on finding the bigger sets we were hoping to find (I was on the search for "Hogwarts Castle") we landed on the jackpot. The Barnes and Noble in the same parking lot as the Toys R Us we had started out at 12 midnight was where we scored big time! We asked the 20-something year old working in the kid's section if he had seen any of the bigger sets and he said no...and then said "But I can just order them for you!" WHAT? Serious? Why had no one offered this at any of the previous three Barnes and Noble stores we had been at? GEEZ! SO just like that we were able to both order a set at 50% off. Done. Deal of the day for my kids, for sure! We figured we should end on a high note and headed home. What a day!

All in all I got some pretty good deals on gifts and on Anthro stuff for me. Mission accomplished...until next year! =)

I'm patiently awaiting the arrival of my Black Friday online purchases...hoping they arrive before the end of the week. Most things shipped out UPS so you know what that means....slow boat! I have quite a few returns to make since I ended up buying some things at 25% off and then was able to score them on Black Friday for 50% instead. That'll be next week's project...returns.

So here's what I wore on Black Friday:

I was comfy and warm all day. The peacoat has turned into one of my favorite purchases...it's so easy to throw on a wear and it's suprisingly warm...love it!

Well that was way more information about my Black Friday experience than I'm sure you really wanted to hear, but there you go. Hope you had a fun one too!
Posted by Jenni at 5:50 PM 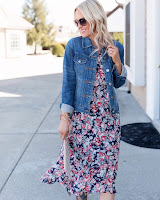